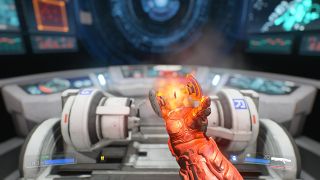 An Argent cell is an item in the 2016 Doom which acts as a permanent statistics boost to the Doom marine himself. The Praetor suit contains ports on the chest and right hand which can absorb pure Argent energy, said to have been part of a retrofitting done to the suit by a mysterious traitorous demon. The cells, which are found in small white containment units created by the UAC, appear as small glass orbs with a compact sphere of red Argent energy concentrated in the middle, and metal conductors on each end. Each cell is manufactured by compressing Argent energy down to a stable radius, known as a "Hayden Sphere". In this configuration, the cell can be safety contained and transported until the cell's casing is broken. The Argent cells are initially made available to the marine at Samuel Hayden's command, as he instructs VEGA to grant him access to all of the capsules after observing that the energy "seems to agree with (his) system." At least one Argent cell will appear in most levels following this, beginning with the Foundry, for a total of twelve cells in the game.

After picking up an Argent cell, the Doom marine will crush the glass casing in his fist, causing the red energy sphere to disperse into electric arcs which then re-concentrate around the collector in his right fist. He must then choose the subsystem to which he wants the power routed. It can be distributed to health, armor, or ammunition, and results in a permanent increase in carrying capacity for that statistic.

Health is upgraded in units of 25 hit points from a base of 100, up to a maximum of 200, for a total of four upgrade levels.

In the same vein as health and armor, each Cell increases the ammo-carrying capacity by a linear amount for a maximum of four upgrade levels.

The Argent energy sphere inside each cell has a slit-like void in the center, giving the item an appearance uncannily reminiscent of the all-seeing Eye of Sauron as it was depicted in director Peter Jackson's The Lord of the Rings and The Hobbit film trilogies.