Argus is a single-level PWAD for Doom II that was released in November 1994. It was designed by Ty Halderman and Robert Taylor as a revamped version of their Sacrifice level E1M1: A Good Day to Die. 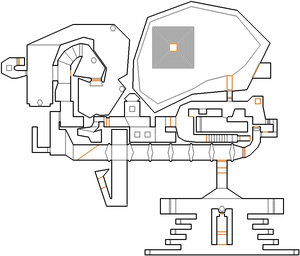 Map of Argus
Letters in italics refer to marked spots on the map. Sector, thing, and linedef numbers in boldface are secrets which count toward the end-of-level tally.

This map has a fairly simple main route, which only requires the blue key and can be finished quickly with less than 50% of enemies killed. When you start the map, open the door to enter the main structure, where you will find a series of rooms in succession, full of demons and former humans. Destroy the barrels to open the passage and kill the demons. After this area, you will reach a junction with a main hallway, this area is marked by an impaled human, to the right of it, you will find a passage full of imps, and at the bottom you will find the blue key. When you pick up the blue key, a group of imps will teleport into the area. After that, you can continue to the end of the hallway and you will be able to open the blue door.

Walk a bit and you will come across another door, which you can open with the key, then, you will enter a tight passage which will lead you to some stairs, go up them to continue. You will now find yourself in an area with different textures. In front of the stairs the path continues, and you will find a small tech room with demons guarding it, here you can pick up ammo for the rocket-launcher. When you leave this room, follow the path straight ahead, which will lead to a small turn and you will see the exit. There is a small switch attached to the wall next to the player, press it and some steps will start to come out. Go up the stairs, open the exit door, kill an imp and you can press the exit switch to finish the level.

There's various secret areas, but these are optional and not needed to finish the map, unless you're aiming at fully completing it.

* The vertex count without the effect of node building is 642.