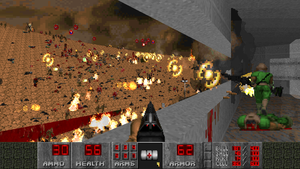 The player and few dozens of marines defends a base against thousands of enemies.

ArmageDoom is a partial conversion made by Sergeant Mark IV, featuring 7 new levels, new weapons, friendly soldiers, and new enemies. It was the first wad ever made by it's author.

After the events of Doom II, humanity begins to rebuild civilization under the command of the UAC, which builds a massive city on the desert of New Mexico protected by a giant shield. Someday, the Hellspawn starts another full-force invasion. They take over the Power Station, and bring downs the protective shield, rendering the city vulnerable. The player's mission is to help the marines to break the siege, escape from the city, cross the desert, get to the Power Plant, and turn the shields back online.

All enemies and weapons were modified. The player is able to carry inventory items in a similar way of Heretic. Levels have varied objectives that ranges from usual key hunting, traveling from point "A" to point "B", and defending bases against waves of enemies with the help of friendly NPC Marines. Most environmental decoration objects such as trees and parked cars can be destroyed. Every level has a sub-boss battle at the end.