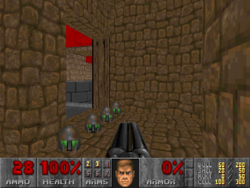 An armor bonus (or spiritual armor according to the manuals) is a powerup that appears as a bronze-gray helmet with a green glow emanating from within. Picking one up increases the player's armor percentage by one percent up to a maximum of 200 percent (or, in versions of Doom prior to 1.2, a much larger value).