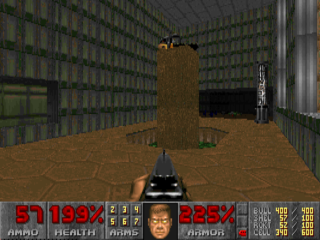 In versions of Doom 1.2 and earlier, armor percentage was not limited to 200. Since the armor count in the status bar has only three digits, the display can wrap around to 0 percent if enough armor bonuses are picked up to reach the thousands column.

There is no set limit to the amount of armor that a player can accumulate in these versions of Doom, so theoretically, a player could overflow the signed integer variable for the armor percentage, and consequently have a negative amount of armor.

In early 2016 it was demonstrated that a secret level could be constructed which itself contains a secret exit, and up to 43898 armor bonuses placed in that map (a limitation imposed by the zone memory allocator). By continually collecting the armor bonuses and instantly exiting the level for more than 4.5 hours, it is possible to eventually reach the integer overflow point.[1] It is possible to increase the number of armor bonuses further by utilizing a source port such as PrBoom+ and achieve negative armor in the optimal amount of time, 16852 tics.