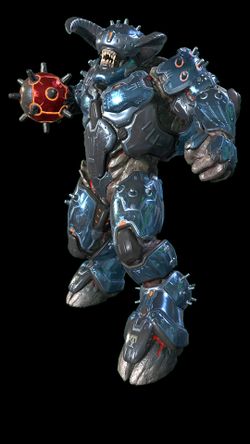 The armored baron as it appears in the Codex.

The armored baron is a monster introduced in The Ancient Gods, Part Two. It is a variant of the baron of Hell that has been outfitted with extremely durable regenerating armor, as well as a morning star replacing its right hand.

The armored baron is completely impervious to damage while its armor is intact. It often alternates between close-range attacks where it lunges at its target with either hand, and long-range attacks where it either launches the morning star at the player or leaps up and creates an all-around shockwave on hitting the ground. The launch attack moves very quickly and has a deceptively long range, so dashing to the side is recommended when you see it coming. While not as aggressive as its regular counterpart, the armored baron can still be quite deadly if one cannot dodge its attacks.

When the baron prepares a long-range attack the morning star will flash green; shooting it at this point with a powerful weapon like the ballista will cause it to detonate, instantly destroying the armor; the armor can also be destroyed with sustained fire from the plasma rifle, with the Microwave Beam mod being most effective. Once the armor is destroyed, the baron must be killed before the armor regenerates or it will have to be removed again; the ice bomb and Sentinel Hammer will freeze or stun the baron, allowing more time to damage it.

Armored barons are grafted with technology from Immora, and normally patrol outside its gates. The morning star is cursed by the Dark Lord himself, and one strike can obliterate both body and soul.