Artica 4 is a single-level PWAD for Doom II and the MBF source port that was released in February 1999. It was created by Mike Watson (Cyb) as the fourth entry in his Artica mini-series, and uses the music track "Avalanche" by Mark Klem.

Artica 4 includes a modification that replaces the BFG9000 with a Demon Egg, allowing the player to throw his own miniature demons against enemies. 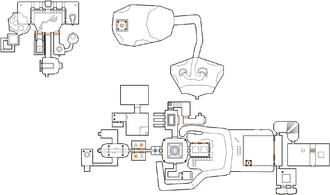 Map of Artica 4
Letters in italics refer to marked spots on the map. Sector, thing, and linedef numbers in boldface are secrets which count toward the end-of-level tally.

* The vertex count without the effect of node building is 1721.