This article is about a weapon from an alpha version of Doom. For the Strife weapon, see Assault rifle. 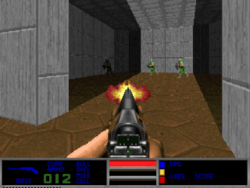 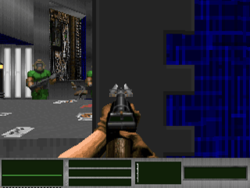 With bayonet attached, in Doom v0.4

The rifle was a weapon in the pre-release versions of Doom, an implementation of Tom Hall's initial Doom Bible idea for a "machine pistol" with a knife attachment. Presumably intended to be the player's starting weapon, it was replaced with the pistol in the Doom press release beta and does not appear as a usable weapon in final versions. The player character and trooper sprites still depict them wielding rifles, however.

Additionally, the rifle was to accept the bayonet as an attachment, which would serve as the basic melee attack. This feature also did not make it into the final releases, being replaced by the spiked knuckleduster.

The machine pistol is described as such in the Doom Bible:

"One shot at a time. Has knife attachment for close combat."
―Doom Bible [1]

At this point in time, the bayonet was called the knife, though it was still intended to attach to the pistol. It is likewise described in the Doom Bible:

"Attachment to the machine pistol. Does minimum damage, more on back attack."
― Doom Bible

The Doom v0.2 alpha refers to the gun weapon simply as the pistol in the unused WBOXPIS HUD lump. A picture of the weapon's silhouette is found in the likewise unused WPICPIS lump. The silhouette is derived from the status bar graphic that was used for the pistol in Wolfenstein 3D, though it was edited, slightly changing the shape of the grip and barrel.

The knife likewise appears in the WBOXKNI and WPICKNI lumps. It was directly taken from Wolfenstein 3D.

The rifle makes its first full appearance, replacing the earlier machine pistol concept, in the Doom v0.3 alpha. It is owned by default in this version of the game and can be fired, albeit without any effect on the environment other than a light flash. It uses the PRIF HUD sprite. Its HUD information file has changed its name to WPICRIF. It has no proper pickup sprite, as one is still included for the pistol as a crude temporary graphic named PISTA0, which is so badly drawn that it includes a text caption and arrow pointing at the item in order to explain what it is supposed to be. This graphic, like all pickup items in 0.3, is still using the v0.2 palette. The WPICRIF HUD icon gives stats of 5 damage and 2 rounds per second for the weapon.

The knife has likewise been changed into the bayonet, and functions as a separate weapon which appears as the rifle with the attachment on its end. It makes its first full appearance here, also owned by default, and using the PBAY HUD sprite. It no longer has an information lump for the HUD at all, and is likewise missing a pickup sprite - one is still included for the knife concept as the lump KNIFA0.

There are no changes in the Doom v0.4 alpha to the rifle or bayonet. However, the previous pistol and knife pickup sprites have been removed.

The rifle's HUD sprites have been entirely redrawn in Doom v0.5, giving the weapon a slightly more sleek and futuristic appearance. The bayonet has not been redrawn, however, leaving it inconsistent with the new rifle. The rifle is also referenced by the I_RIFLE and I_WRIFLE graphics for the status bar, and the bayonet is likewise named and depicted in the I_BAYON and I_WBAYON graphics.

The Doom press release beta finally replaces both the rifle and its bayonet with the pistol and fist that are found in the release version. No further references to a rifle or bayonet can be found in the game's files.