Asylum of the Wretched

Asylum of the Wretched is a single-level PWAD for Doom II for limit removing source ports. It was designed by Ian Myers and uses the music track "". The PWAD is notable for its horror theme and atmosphere, accomplished through the use of new graphics and sounds and a DeHackEd patch. After an initial release in November 2000, it was updated in December of that year, followed by a final update in September 2004. 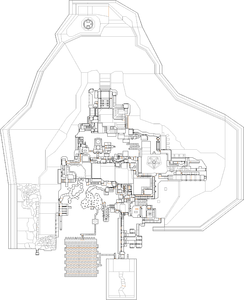 Map of Asylum of the Wretched
Letters in italics refer to marked spots on the map. Sector, thing, and linedef numbers in boldface are secrets which count toward the end-of-level tally.

* The vertex count without the effect of node building is 11724.