Axiom is a single-level PWAD for Doom II released in 2008. It was designed by Didy for Boom-compatible source ports and uses the music track "DOOM," originally composed by Robert Prince for Doom II.

Over the end-level switch watches a statue of an arch-vile in its resurrecting pose, created with a DeHackEd patch that immobilizes a Wolfenstein SS. 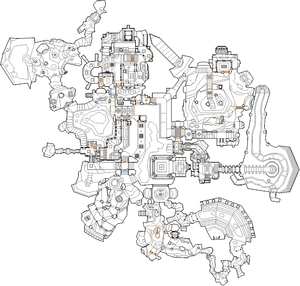 Map of Axiom
Letters in italics refer to marked spots on the map. Sector, thing, and linedef numbers in boldface are secrets which count toward the end-of-level tally.

* The vertex count without the effect of node building is 11409.