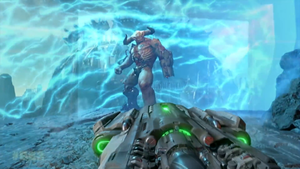 The BFG-9000 taking aim at the Tyrant.
This article is about the weapon in Doom Eternal. For other versions of this weapon, see:

The BFG-9000 returns as a weapon in Doom Eternal, looking similar to its previous appearance but with fewer exposed parts. In this incarnation, it shares many similarities with its previous design, but lost the red colored areas on the top of the weapon. Unlike its previous appearance, it is now part of the wheel as a normal weapon (albeit one that is shared with the Unmaykr after the latter is unlocked). Its targeting reticule appears to have a counter that keeps track of how many monsters it kills in a single blast. The BFG-9000 expends 30 Argent cells when fired, and can only carry a maximum of 60 cells.

The BFG-9000 is obtained in Mars Core as part of the BFG-10000 orbital defense weapon system.

"The longer the projectile can fly, the more damage the tendrils can do. If you see a BFG ammo nearby, that might mean you can afford to shoot the gun."
― Doom Eternal dossier protip

The BFG is seen in Battlemode as a special weapon that the Doom Slayer can use against the player-controlled demons after buying it as a power upgrade. It grants 75% damage resistance for 5 seconds after firing it, but since the tendrils deal no damage to player-controlled demons it needs to hit them directly with the energy sphere to be effective.

The BFG-9000 remains the most powerful weapon in the UAC's arsenal. When fired, Argent energy tendrils lash out from a sphere of superheated energy, obliterating anything nearby.

Dr. Samuel Hayden's studies on the weapon refined it, making it the linchpin of the BFG-10000 orbital defense station on Phobos. By firing the weapon through a magnifier array and into a series of reactive lensing rings, a stream of gaseous Argent energy is pumped through the barrel which ignites in reaction to the electrified plasma. The resulting energy wave has enough force to crack a planet's surface, and is used to great effect by the Doom Slayer in order to access a secret portal hidden in the core of Mars.