BLT is a single-level PWAD for Doom that was released in 1994. It was designed by Neal Ziring. It was released with Lake4 included as a bonus level. 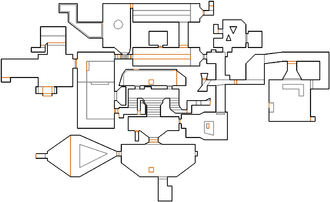 Map of BLT
Letters in italics refer to marked spots on the map. Sector, thing, and linedef numbers in boldface are secrets which count toward the end-of-level tally.

A general tip is to make your ammo count. There's little ammo and lots of enemies, so be considerate. You start the map in a small courtyard. In front of you there will be some enemies. Dodge them and next to the pillar you will find the shotgun. Enter the main structure and go up the stairs on the left side. Go to the bottom and press a switch, which opens a door behind you where the blue key is. Now take the opposite path until you reach the bottom and activate the switch. It opens a door on the east side, near the main entrance.

Inside is a small nukage pool. The place is quite dark so take caution. Activate the switch on the column to unlock the entrance. Go ahead and turn right. You will see another switch which opens a door. Follow the path to the end, where you will find a small room with a few imps and cacodemons. Press the switch to the west side and then, on the opposite side, take the teleporter. Now the door on the west side, next to a red torch, will be open.

You will enter a tech corridor. In the first blue door you will find the red key area. Pick it up and return to the corridor. Continue ahead to the end of the path. You will go up a small elevator and pick up the rocket launcher. Destroy the obstacles and continue through the door. The next room contains the yellow key. Pick it up and go back the way you came. Jump over the edge and go back to the beginning of the map. Now, with the yellow key, you can cross the final door and exit the map.

The linedefs at the side of the door leading to the blue key room (linedefs 136 and 137) have both been assigned Action 11, meaning that pressing either of them will exit the level.