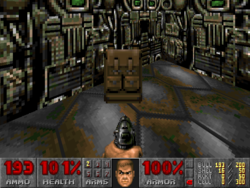 A backpack found in a secret area in E1M2: Nuclear Plant. 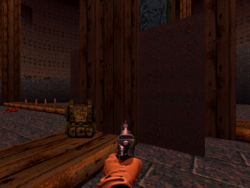 A backpack at the center of the large staircase in Doom 64 MAP19: The Spiral.

The backpack is a powerup that doubles the player's ammo-carrying capacity; after picking up a backpack, the player is able to carry up to 400 bullets, 100 shotgun shells, 100 rockets, and 600 energy cell units at once. When picked up, the backpack also gives the equivalent of the small ammo item for each type of ammunition: 10 bullets, 4 shotgun shells, a rocket, and 20 energy cell units (doubled on the "I'm Too Young To Die" and "Nightmare!" skill levels).

If the player picks up a subsequent backpack, only the extra ammunition is collected. A backpack can be picked up even when the player cannot carry any more ammo of any type.

Backpacks are not included in the items percentage displayed at the end of each level.

In the IWADs the backpack is first encountered on these maps per skill level:

The IWADs contain the following numbers of backpacks per skill level: 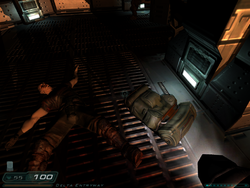 A backpack lies near its dead owner near the entrance to the Delta labs.

The backpack is present in Doom 3, but differs from its classic counterpart that it does not increase the player's carrying capacity. It may contain varying amounts of ammunition, as well as some quantities of health, armor and air supply. It is an uncommon item, being found in few levels, often in secret places.

The message appearing on the HUD when collecting a backpack is often erroneous; it may say that a variety of ammunition types were collected even if the backpack did not contain all of them.

When summoned by a cheat code, the backpack will give the player 12 pistol bullets, 8 shotgun shells, 30 machine gun rounds, 50 chaingun rounds, 5 grenades, 3 rockets, and 25 cells for the plasma gun – equivalents of the one "small" pickup for each weapon, much like its classic predecessor. This contradicts the comment in the definition file, which states that backpacks are "empty by default, so designer must choose amounts". For all backpacks placed in the game, however, the latter is true.