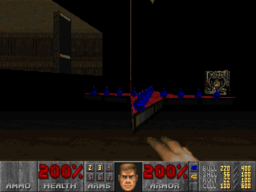 A bad seg angle being displayed in Doom II's MAP09: The Pit

A bad seg angle is the cause of a rendering error that occurs in Doom when the angle stored in a seg (a linedef segment) is incorrect.

On June 8th 2018, it was discovered that BSP, DoomBSP, ZenNode and ZokumBSP all incorrectly compute the angles when a seg is split.[1] This error is therefore also present in the original Doom games and most of the maps created for vanilla and many of the source ports. Some source ports do not utilize the pre-computed seg angle, and are therefore immune to this error.

When a seg is split, the angle of the new segs can be slightly different from the original seg. If the angle is not recomputed to fit the new vectors formed, rendering errors can occur. A good example of this is at the star structure near the exit on Doom II MAP09. When some of the sides of the star are viewed at an angle where the line of sight is almost parallel to the seg, the bad angle stored for this seg will lead to a rendering error. Unlike slime trails, this also causes wall textures to be drawn incorrectly.

This was previously thought to be a type of slime trail, but it is now known to be a distinct error caused by incorrectly coded tools. It is not a precision error, unlike slime trails.

ZokumBSP released a beta version the same day that fixes this issue. There's also a script written in omgifol that can fix the bad angles in a wad file to remove this error.