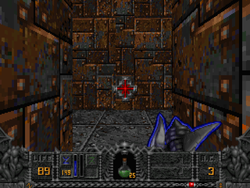 The Banishment Device found in Hub 1: Guardian of Steel.

The Banishment Device is an artifact in Hexen. Like the Chaos Device, the Banishment Device has teleporting capabilities, but rather than being used to teleport the player out of dire situations, it teleports an enemy to another area in the level away from the player, provided that the enemy gets hit by the resulting projectile when the artifact is used.

When banished, a creature is sent to one of the deathmatch start points on the map. If there are no deathmatch starts, it will instead be sent to a regular player start. If another creature or player is standing on the destination point, the banished creature may telefrag them.

The Banishment Device does not work on the Death wyvern, the Heresiarch, or Korax.

In the IWADs the banishment device is first encountered on these maps per skill level:

The IWADs contain the following numbers of banishment devices per skill level: