Baron's Realm is a vanilla-compatible single-level PWAD released by SMG_Man in December 2021, who originally created it back in August 2021 for a speedmapping project held on the Doomworld forums. It is a loose remake of Baron's Den, it requires TNT: Evilution as the IWAD, and it features the MIDI piece "Astral Dreadnought" by Jimmy. 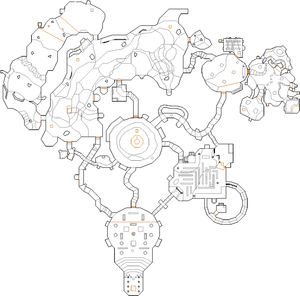 Map of Baron's Realm
Letters in italics refer to marked spots on the map. Sector, thing, and linedef numbers in boldface are secrets which count toward the end-of-level tally.

* The vertex count without the effect of node building is 3247.