Baron Gate is a single-level PWAD for Doom II. It was designed by Malcolm Sailor and released in 1997 as part of his Shrthard.zip along with Quick Is Good and Center. 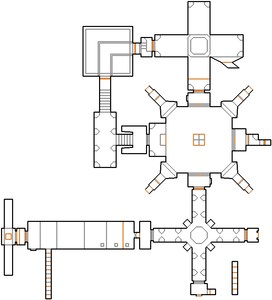 Map of Baron Gate
Letters in italics refer to marked spots on the map. Sector, thing, and linedef numbers in boldface are secrets which count toward the end-of-level tally.

This level is short and fast, but features several high level enemies like barons of Hell and pain elementals, so you will have to be careful. You start immediately into the action, on a platform that leads to a pit with four barons of Hell. Behind you is a green door, but to open it you must jump into danger and press a switch. You can kill the barons of Hell with the rocket-launcher and the shotgun. Once you kill them, head towards the corner in the northwest, the only unlocked marble path. There are two doors in a row, open them until you press the switch at the bottom.

Once you press the switch, you must get out quickly, because a baron of Hell will teleport right behind you, trapping you. Then, go through the green door you just opened. Follow the path up the stairs and you will encounter two pain elementals. To your right, the path continues and you will find a revenant guarding the blue key. Once you take it, go back to the start and go through the blue door. Once again, the procedure repeats itself, so you must leave quickly or you will be trapped by the baron of Hell.

Once you eliminate them, you will notice that a metal wall with a switch has been revealed. Once you press it, a monster closet with chaingunners will immediately open. In front of you there is a door and the path continues until you reach a cross-shaped junction. A super shotgun is waiting for you in a small empty marble fountain, but as soon as you pick it up, you will be ambushed by several former humans, chaingunners and Hell knights. After this, continue down the path with the only green door in sight. It will reveal some steps that will lead you to megaarmor and the yellow skull key.

Return to the start and go through the yellow marble door, which, like the previous ones, will end in an ambush in exactly the same way. Then, a metal door will be revealed next to it, which is actually an elevator that, when you go down, will be full of spectres and a revenant. Go up the elevator and you will enter a new area that will take you to a teleporter, which leads to some cross-shaped paths, where you will be ambushed by Hell knights on each side and vertical chaingunners in windows.

The east path will take you to a switch that opens a door on the west path, where the red key is located. The other paths cannot be opened normally.

Once you reach the red key, you will be teleported to the other end of the room, where you will pick up a BFG9000 and be attacked by several pain elementals in front of you. Once you eliminate them and finally pick up the red key, a room with a large amount of chaingunners will open up behind you. At the back, a green door awaits you. Once you open it, you will pick up another red key which immediately takes you to the next area, where an arch-vile will wake up and cross a teleporter. Follow it and you will return to the beginning, but you will have to fight the arch-vile and several Hell knights.

Go through the red marble door and the same procedure will be repeated, but, this time, open many more barons of Hell on the platform in the middle of the area. Once you eliminate them, you will notice that on the south side a door has opened, which takes you to the previous crossroads where you found the red key, but now, the locked doors are open. The door at the bottom on the south side will open to several arch-viles, but here you will also find a switch that lowers a door to your left. Take the path and you will teleport to a small corridor, go straight ahead and you will return to the place of the switch.

Now, to exit the map, go back to the beginning of the level and you will see that the platform that was in the middle of the area has lowered, cross it and you will have finished the map.