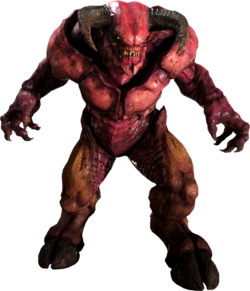 A baron of Hell.
This article is about the monster in Doom (2016). For other games, see:

The baron of Hell returns as a monster in Doom (2016) as a towering, pink-skinned, horned demon with an enormous muscular stature, sharp-clawed green-glowing hands, and goat-like legs with hoofed feet. In addition to projectile and melee attacks which call directly back to its classic predecessor, it also possesses the ability to stomp the ground and unleash a massive shockwave area attack. Unlike its classic version, it bears little resemblance to the Hell knight, which retains an appearance similar to its Doom 3 incarnation. The barons are said to be direct, personal servants of the Lord of Hell, and it is said their powers are directly tied to their lord's.

The baron has three modes of attack - A melee strike, a ranged green fireball (sometimes charged), and a ground slam to rapidly close distance. All three modes can be easily avoided by strafing around the baron in a circle. It is common for the baron to blindside the player by using a ground slam attack to move from a lower to a higher platform. Often, a Super shotgun blast towards its head can interrupt the baron in the midst of its attack.

Like many demons, barons can be found fighting imps, and are in fact observed doing this upon their first appearance in the Kadingir Sanctum.

The baron leaps onto the Doom marine, crushes his body with a stomp from one hoof, pulls off both his legs and then roars at the marine as he dies. This kill was first seen in the campaign trailer released by Bethesda on February 4, 2016.

The barons were described by the UAC as being the highest ranking demons in the order of the Hell knights. They were never observed to leave Hell, and the Lazarus Project was never able to capture any specimens in their tethering expeditions due to their violent, powerful, and elusive nature. At least one manned expedition, designated MTC 2145/128, was believed to have been lost due to an attack by barons.

Demonic tablets found during the automated survey of 2143 describe the barons as being the royal guard of the dark lord of the fourth age of Hell, an entity on which the UAC had little reliable data. Their power is described as having grown as compared to the past, and it is surmised that this power increase is correlated with their master's status. 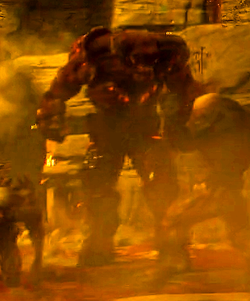 The beta appearance of the baron of Hell.

A pre-release screenshot contained a baron of Hell in the distance which can be observed to closely match the concept art of the baron which appears in The Art of DOOM.[1] This beta version is more or less identical to the final version in physical form, but is more reddish-gray or brown in coloration instead of pink, and includes numerous holes in its bony armor through which small flames emerge.