Barrel2 is a single-level PWAD for Doom that was released in 1994. It was designed by Cameron Newham, and is an updated version of his original Barrel.wad. 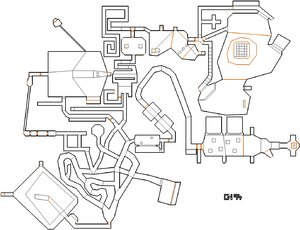 Map of Barrel2
Letters in italics refer to marked spots on the map. Sector, thing, and linedef numbers in boldface are secrets which count toward the end-of-level tally.

Approaching the lift with the shotgun (which is necessary in order to press the switch which opens the door to the next section) raises two pillars behind you. The only way out of this area is to shoot a barrel which activates a trigger which lowers the third pillar. Therefore, if this barrel has already been destroyed prior to entering this area, you will be stuck.

* The vertex count without the effect of node building is 866.