Base is a single-level PWAD for Doom that was released in August 1994. It was designed by Brandon Davids (Talon).

This WAD was reused and compiled for Heroes 2 as MAP24. 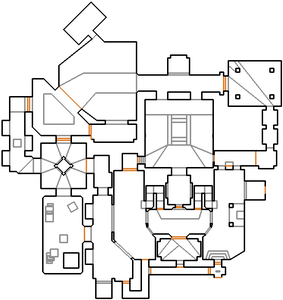 Map of Base
Letters in italics refer to marked spots on the map. Sector, thing, and linedef numbers in boldface are secrets which count toward the end-of-level tally.

You start the map in a room with three different paths. Take the right door, which leads to the east side. Follow the path and you will reach the blue key, once you pick it up you can go back to the beginning, but this time take the middle path.

Cross the small bridge over the river of nukage and go left. Continue until you reach the cacodemon platform and then take the left path, open the door and enter a small green marble room. Turn left again, to the east side and follow the path. A door at the bottom will open, revealing the red key. Once you take it, go back the same way to the small bridge area.

Go straight ahead and you will see the red door clearly in front of you. Go through and you will enter a small cavern or cave. Continue to the right until you reach some switches, which will open the door to the exit, however, they will also reveal a Cyberdemon, which comes out of a small room on the east side. Wait a bit for the cyberdemon to move and enter its room to collect the invulnerability and press the switch that activates the stairs to the exit.

Go up the stairs and you will enter the exit door, press the final switch and you will have finished the map.

The release includes a separate demo file, BASE.LMP, by the author. It requires Doom v1.2 to be viewed and runs for 9:53.69 (20779 tics), showing the level's completion on Ultra-Violence.

* The vertex count without the effect of node building is 610.