Bastion of Chaos is a single-level PK3 for Doom II and the GZDoom source port that came out in July 2020. It was designed by Bridgeburner56 and uses the music track "The Coming Hour" by John Weekley (PRIMEVAL). It won a Cacoward that year, and the song was distinguished as an Odyssey of Noises.

Bastion of Chaos is a very large slaughter map using OTEX textures and advanced lighting effects of GZDoom. The level is available in a full edition requiring a comparatively powerful computer, as well as a low spec edition for modest systems. 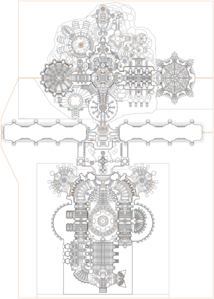 Map of Bastion of Chaos
Letters in italics refer to marked spots on the map. Sector, thing, and linedef numbers in boldface are secrets which count toward the end-of-level tally.

Bastion of Chaos is only for GZDoom, which does not support the playback of demos except for the exact same version as the one it was recorded with. Ancalagon did his UV max run with GZDoom 4.5.0. He also published the video footage of it on his YouTube channel.[1]