Batman Doom is a total conversion for Doom II, created by ACE Team. In Batman Doom, the player plays as Batman fighting various criminals in Gotham City. The WAD is loosely based on the Knightfall storyline that ran in the comics from 1993 to 1994, with some levels recreating specific events from the story.

The game is well-known for its complex DeHackEd patch created by Edmundo Bordeu and the numerous vanilla tricks it uses which make it very different from Doom. In addition to its graphical and gameplay changes, Batman Doom also features a custom soundtrack created by Andrew Wood (Corax), Martin Linda, Janek Szulew and Juan Sanchez.

The levels in Batman Doom are broken into seven chapters. Each chapter begins with a "Batcave" hub map and features several levels themed around and culminating in a boss fight against a member of Batman's rogues gallery. 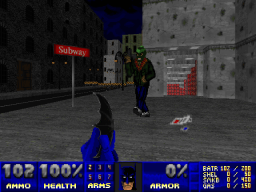 Batman versus a terrorist

Batman Doom is famous for a large number of both DeHackEd and mapping tricks used in it:

Tazer
A close-range melee weapon that replaces the chainsaw.

Batarang
A projectile weapon that replaces the pistol.

7th weapon
An untitled weapon that the player receives at the start of MAP30.

Strake
Knife-wielding criminals who charge at Batman. Grey strakes have 130 health points, while green ones have 150. This enemy replaces Doom's demon and functions in a similar manner.

Shotgun thief
A hitscan enemy similar to Doom II's sergeant. They have 30 health points. This enemy has a slightly tougher variant, the Warring Thief, with 100 health points. These can be distinguished by their grey hat and dislike of Feuding Cheungs.

Cheung
Aggressive gang fighters that lurk the dark streets of Chinatown. They come packed with shurikens and a wicked iron claw, and behave similarly to an imp. They have 60 health points. There is a second, identical-looking variant, Feuding Cheung, with 120 health points instead of 60.

Slum lord
Melee based enemies that charge the player, similar to a strake. Unlike strakes, their attack comes out instantly. They have 150 health points. A version of this enemy serves as a miniboss and the level ends when he is defeated. The miniboss Slum Lord has 225 health points.

Hawk
Birds that sometimes come in packs. They attack by charging the player, akin to the lost soul. They have 10 health points.

Sniper
A professional killer that uses explosive shotgun shells. This enemy often hides in hard-to-reach places or high grounds. The sniper utilizes the arch-vile's line-of-sight attack which can only be avoided by breaking sight. Snipers have 60 health points.

Penguin Bomb
A robot in the shape of a penguin that waddles towards the player and explodes when it gets close. It does not have an alert sound, and can often come out from smaller locations or corners to surprise the player. Due to its explosive nature, you should keep your distance when destroying it. It has 30 health points.

Zeke
A mid-tier enemy that throws a Molotov cocktail to the floor that spreads fire exponentially. His attack is so intense that sometimes even he will be caught under his fire. He has 350 health points.

Clown
A mid-tier enemy that shoots a volley of two fast-moving darts. They have 300 health points. There are two versions of this enemy: the regular clown, and a "super clown" with 400 health points.

Flamethrower dude
Further in the game you will encounter these gas-packed villains. These enemies fire a short-range flame and are best fought with long-distance weapons. He has 350 health points.

Firefly
A minor member of Batman's rogues' gallery that functions more or less like a flying chaingunner. He has 300 health points.

Bloody eyeball
A flying mass of eyeballs that fires batarangs at the player. It has 500 health points.

Jerrycan
A green can of some unknown material. Explodes when it takes too much damage. Often placed in inconvenient locations. It has 20 health points.

Axis Chemical Co. barrel
Behaves identically to the jerrycan aside from appearance. It also has 20 health points.

Landmine
When patrolling the streets of Gotham, watch out for these, or else you'll get blown sky-high. It has 1 health point.

Street fires
Small fires can be found occasionally and hurt the player when they get too close. They cannot be killed.

Fire jet
A pillar of flame that pops up rhythmically to fry the unsuspecting player. It cannot be killed.

Scarecrow sniper
In MAP31, several of Scarecrow's illusions appear in front of the player to throw a cloud of fear toxin at them, then disappear.

Killer Croc is the boss of the first chapter of Batman Doom. He has a unique attack where he will pick up rocks on the ground and throw them at Batman. This attack was created in DeHackEd via clever usage of the arch-vile's resurrection ability. He has 1050 health points. Killer Croc is first encountered at the end of MAP04 and appears again as the first boss in MAP28.

Tally Man is the boss of the second chapter of Batman Doom and fires two hitscan shots at a time. He has 1200 health points. The Tally Man first appears at the end of MAP08 and is fought again at the end of MAP28. In both instances, defeating him will end the level.

Scarecrow is the boss of the fourth chapter of Batman Doom. He replaces the revenant and utilizes a similar homing missile attack. Scarecrow is encountered at the ends of maps 15 and 16. In MAP15, the player must defeat him quickly in order to access the secret level. He has 1300 health points. Scarecrow is last encountered in MAP29 and is the second boss fought in that level.

Two-Face is the boss of the fifth chapter of Batman Doom. He is equipped with a bazooka that fires a cyberdemon rocket at the player. He is first encountered at the end of MAP20 and serves as the second boss in MAP28. He has 1200 health points. In both boss fights, he is accompanied by several low-tier enemies.

Joker is the boss of the sixth chapter of Batman Doom. He is encountered at the ends of maps 24 and 25 and serves as the final boss of MAP29. Joker has two forms. The first form utilizes an arch-vile line-of-sight attack similar to the non-boss enemy, the sniper. The second form uses a dart attack, similar to that of the non-boss clown enemies. Both have 800 health points.

The Penguin proper is encountered during the second half of the player's trip to Arkham Asylum. The player is sieged by penguin robots and fires off hitscan attacks in a similar fashion to Tally Man. When he takes enough damage the lamp hovering above his head will fall, rendering the Penguin unconscious. He has 1000 health points.

Bane is the boss of the seventh and final chapter of Batman Doom, appearing in MAP30. The player must defeat Bane using the 7th weapon, which can be picked up at the start of the level (the words "fight only with these gloves!" appear). If the player switches to a different weapon, the words "you failed to fight Bane with your fists" appear over the screen, leaving the player with no weapons and defenseless against Bane. Bane utilizes a charge attack, similar to the lost soul, and will occasionally pause to taunt the player. Bane has 140 health points. When killed, the level ends.

The TC is designed to be compatible with vanilla Doom and is available for both PC and Macintosh. However, a bug in DOS DeHackEd means that it does not run properly in vanilla Doom (after switching to the fist it is impossible to switch away). A patch has been created to allow Batman Doom to run in vanilla Doom properly.

Several fixes have been released to run Batman Doom properly in modern source ports. A ZDoom version recreating the DeHackEd gameplay modifications with DECORATE is linked below. Crispy Doom can run both the original version and the slightly fixed one (not displaying the unneeded episode selection menu) without the aforementioned fix for vanilla Doom.

The GZDoom-based graphical overhaul of Batman Doom named Batman Doom: Reborn is in the works.

Due to the aforementioned DOS DeHackEd bug, ACE Team decided to recommend Boom as the preferred PC port upon release. However, this inadvertently caused the Zeke character's Molotov Cocktail attack to crash the game, forcing them to simplify the effect for the PC version.

In the original Mac version, the Molotov attack spawned a large number of flames by using a recursive loop of the pain elemental's death code pointer. Each flame (a modified lost soul) called the A_PainDie code pointer, which, in turn, spawned three more flames. This was limited by vanilla Doom's hard-coded limit of 21 lost souls - after the maximum number of flames had appeared, no more would be spawned.

Since Boom removes the lost soul limit, this effect now caused the engine to crash. ACE Team simplified the effect by only spawning a single flame instead.

The original effect was only rediscovered in late 2018. Since PC vanilla Doom compatibility was restored with an earlier patch, the original Molotov effect is once again compatible and a new patch restoring it was created.