Beach Day is a single-level PWAD for Doom II, meant for ZDoom-based ports that was released on December 16, 2008 by Aleksandr M. (Dragon Hunter). As the title implies, this level revolves around a large sandy beach overtaken by the forces of Hell, and features several different locales like a hotel and a football field. The par time defined in MAPINFO is 1:30. 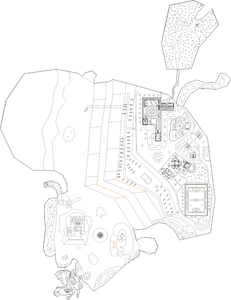 Map of Beach Day
Letters in italics refer to marked spots on the map. Sector, thing, and linedef numbers in boldface are secrets which count toward the end-of-level tally.

* The vertex count without the effect of node building is 9884.