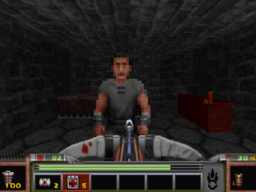 The Strifeguy confronts Beldin in his cell in the Order's Sanctuary.

Beldin is a minor character in Strife. He is held prisoner in the Order's Sanctuary, and is part of the first objective for the player in the game. He uses the peasant actor and does not have voice acting or a character portrait.

Beldin was apparently tricked by Harris and then locked up in the Sanctuary. He mentions that he gets to look forward to being questioned by the Programmer. According to Rowan, he is also intending to reveal the location of the Front's hidden base in Tarnhill, though Beldin himself mentions no such intention - presumably the information will be tortured out of him if not freely given. Rowan thus sends the player to assassinate Beldin and bring his ring back as proof. Also in Beldin's cell are 10 gold coins which the player can take.

In exchange for Beldin's death, Rowan awards the player 50 gold and a com unit which first puts him in touch with BlackBird and the Front.