Belial's Bad Brain is a single-level PWAD for Doom II meant for limit removing source ports. It was designed by Alexander S. (Eternal) and uses the music track "Somewhere Over the Horizon" by Mark Klem, originally from Requiem.

The second of Eternal's slaughter maps, Belial's Bad Brain originated as a four-hour speedmapping submission to a contest held on Doom Power, and was later modified and greatly expanded for its standalone release. 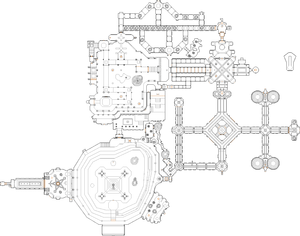 Map of Belial's Bad Brain
Letters in italics refer to marked spots on the map. Sector, thing, and linedef numbers in boldface are secrets which count toward the end-of-level tally.

* The vertex count without the effect of node building is 15258.