Berserk is a single-level PWAD for Doom that was released in 1994. It was designed by Jon Landis. 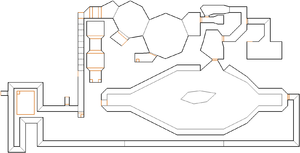 Map of Berserk
Letters in italics refer to marked spots on the map. Sector, thing, and linedef numbers in boldface are secrets which count toward the end-of-level tally.

When this map is opened in PrBoom+, the HUD states that there are six secret sectors. However, only the five listed above show up as secret in the editor, and therefore the maximum achievable secret percentage is 83%. DMMPST and DeePsea report that the sixth secret is Sector 56, which is the south-eastern of the two teleporters in the empty room mentioned in #3 above, and is impossible to enter as the teleporter is one-way.

East of the exit are two doors leading back to the start area. The eastern one can be opened from either side as normal, however the western one has its eastern linedef (Linedef 244) on the wrong side. As a result, opening the western door (Sector 45) and pressing Linedef 244 whilst facing east will cause the ceiling of the adjacent sector (Sector 46) to lower to the floor. This will make it impossible to return to the start area (it will still be possible to exit the level).

* The vertex count without the effect of node building is 294.