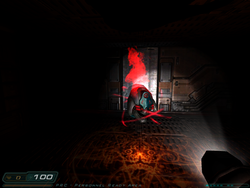 The first berserker in the game, found near the end of Communications Transfer: Maintenance and Transfer Station.
For the Doom RPG powerup, see Berserk#Doom RPG. For other versions of this item, see:

The berserker power-up in Doom 3 makes the player invulnerable in single player games (to everything except for environmental effects) and enhances the damage of all weapons, granting a 2x multiplier to projectile damage, a 2x multiplier to melee range, and a 30x multiplier to the damage of melee weapons. These damage bonuses go far beyond the increase granted by the classic berserk pack, enabling the player to kill even the toughest non-boss monsters with a single punch. However, the berserker only has an effect for a limited duration of 30 seconds.

The power-up resembles a fearsome looking metallic skull that appears to be wearing a marine helmet with horns, floating in midair. While the power-up is active, the player's vision is heavily blurred and distorted, combined with constant agonized screaming sounds. This strongly suggests that the berserker item is of demonic origin.

While the player will automatically change to the fists when the berserker is collected, it is possible to manually change to any other weapon that is currently possessed, and the power-up will affect all of them as described above.

The berserker appears only twice in the single player game, being found near the end of Communications Transfer, and one final time in Hell. In the Doom 3: Resurrection of Evil expansion, the berserker does not appear in single player at all, being replaced by the berserk ability of the Artifact, but it does occur in multiplayer.