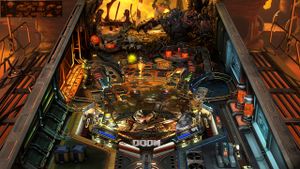 Bethesda Pinball is a stand-alone app for Google Play and the iOS App Store and a downloadable content pack on Steam, Nintendo Switch, Xbox 360, Xbox One, PlayStation 4, and other platforms for Pinball FX3 by Zen Studios. It was released on December 6, 2016,[1] and consists of three pinball tables, each themed after a different Bethesda-published game series: Fallout, The Elder Scrolls V: Skyrim, and Doom (2016).

The Doom-themed virtual pinball table pits the Doom Slayer against the cyberdemon in its ultimate goal, allowing the demon to be attacked with the marine's BFG-9000 when the proper conditions have been met. The table itself is made up of elements taken from the Foundry, Lazarus Labs, and Kadingir Sanctum, and appears to be situated in an outdoor area near the UAC Mars Base.