Black Magnetic is a single-level PWAD for Doom II and the GZDoom source port. It was designed in 2015 by Angry Saint and uses a MIDI rendition of "Quad Machine" from Quake II, sequenced by Jay Reichard (silentzorah), as its music track. Its version 1.1 was submitted to the Doomjà-Vu contest and reached fourth place, while a later update to v1.3 added dynamic lights and a new sky. 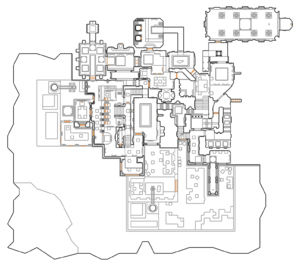 Map of Black Magnetic
Letters in italics refer to marked spots on the map. Sector, thing, and linedef numbers in boldface are secrets which count toward the end-of-level tally.

As the map was created for the "Doomjà-Vu" contest organized by Daniel Gimmer (Tormentor667), it is therefore based on the layout of E1M7: Computer Station.