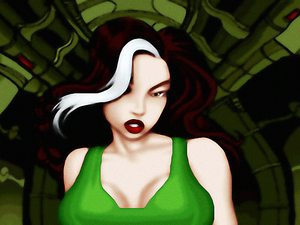 In Strife, BlackBird is a female guide who keeps track of the player's progress and communicates with the player on behalf of the Rebel Front. She is not always the best guide as she continuously gets lost, especially when traveling through many of the game's underground areas; she apologizes for this on numerous occasions.

Her one-sided dialog with the player is frequently amusing and she calls-out silly video game practices ("You know, from the outside, this building looks tiny.") and tactics the player encounters/performs frequently ("Looks expensive. Let's blow it up!"), when not giving directions or directing plot. BlackBird claims to be taking refuge in an underground bunker somewhere, hiding from the Order's influence.

She is voiced by Marcia Pizzo.

In the best ending - killing the Oracle before Macil - BlackBird emerges from her underground bunker during the end sequence, after the Entity is dead.

If the worst of the good endings are pursued - killing Macil before the Oracle - the last fight with the Entity is preceded by a soundfile which suggests that the Entity has been impersonating BlackBird. There is no indication when this impersonation began, or if there was ever a human BlackBird. If the best ending and the worst of the good endings are both to be possible, if the Entity's forces didn't find BlackBird on their own, then either Macil or the Oracle exposed her some time after the player chooses to trust the Oracle.