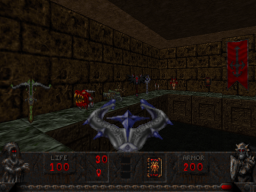 Blasphemer is a project to create a free and open-source Heretic IWAD file. Combined with the free source code, this results in a complete Doom-based game. Blasphemer is intended to be the Heretic equivalent of Freedoom and Zauberer.

As of October 2021, Blasphemer is still in development, with version 0.1.7 available as a fully playable early release.

Between late 2008 and late 2009, the development of Blasphemer was at its highest peak. Within a year, most of the game resources were completely replaced and functional. More recently the rate of development has been very low, but assets are introduced to the project from time to time.

In October 2008, jute proposed the idea of a "FreeHeretic" IWAD project, while presenting some usable assets [1]. The name was later changed to "Blasphemer".

In January 2009, jute uploaded the first public release of Blasphemer, version 0.0.2, at jeshimoth.com. This release contained various textures, sprites and sounds with one map present.

In the next month, Blasphemer 0.0.3 was released, which had replaced all flats, many walls, the status bar, sounds (with more new sounds) and sprites.

In June 2009, Blasphemer 0.1.0 was released, this version having all sprites and textures replaced. jute said that this version only needed enhancements to assets relevant to deathmatch, such as weapon sounds, ammo pickups, player death sounds and so on.

Then in September 2009, Blasphemer 0.1.1 was released, consisting of many fixes to sprites, maps, graphics, and sounds.

In October 2009, Blasphemer 0.1.2 was released. This version had the lump required for source ports to recognise it as a potential IWAD and episodes 4 and 5 were available to access ingame.

In February 2010, Blasphemer 0.1.3 was released, along with the announcement of a new website for hosting Blasphemer, Google Code.

After two years' hiatus, Blasphemer 0.1.4 was released in February 2012. This version had many of the assets mostly finished, but it still required better material, such as sounds, more sprites, weapons and so on.

In November 2012, Stilgar, one of the founding contributors, resigned from the project, passing it on to Blastfrog (then known as Sodaholic). Unfortunately, Blastfrog seems to have departed the project also. David Spring (Springy) is now the current project manager.

In September 2015, the project migrated from Google Code to Github. This allowed contributors to easily submit potential assets for the project with little hassle.