The blockmap is a data structure used for collision detection. That is, the blockmap is used for calculating when a moving thing hits a wall or when two things (one or both moving) collide. The blockmap is simply a grid of "blocks"' each 128×128 units (or double the size of the floor grid). The blockmap can be seen by enabling "grid" mode in the automap.

Similar to how NODES are used for calculating when a line should or should not be drawn, the BLOCKMAP lump is used for calculating a thing/wall collision. Every block contains zero or more linedefs. To detect collisions between a moving thing the Doom engine only needs to run calculations on linedefs in the same block as the moving thing (rather than all the linedefs in the entire map).

Internally the blockmap is also used for thing/thing collisions with each block maintaining a dynamic list of all things contained within it. Using the same principle as thing/wall collisions, the engine needs only to check for possible collisions with every thing sharing the same block as the moving thing.

Removing the blockmap from a level will not affect the rendering of the level or any line of sight calculations, but all collision detection will be nonfunctional. It should be noted that modern source ports will usually build a new blockmap from scratch if one does not exist; it is an easy quick operation and internally created blockmaps need not be subject to the same size restrictions as wad lumps.

Due to the way the original engine did calculations, if a thing's center was on the very edge of a block and another's center was on the edge of an adjacent block it would be abstained from collision detection since both things were actually in different blocks. This bug, which no doubt many players are familiar with, is a result of the original exe (and many current ports) only using the center of a thing to determine if it was in a block and not taking its entire radius into account. Colin Phipps provides an explanation of the phenomenon. It was fixed in ZDoom, however this alters the gameplay by making actors easier to hit. 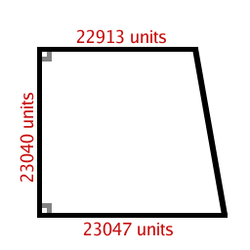 This simple map of only four linedefs, with no compression techniques applied, has a blockmap length of 65534 bytes. This is because it covers a large area, causing its lines to pass through multiple blocks.

The size limitations in the blockmap data structure offset puts some upper limits on the maximum size of a level. Various techniques have been invented to pack more data into the blockmap entry without breaking compatibility. A very common technique is to combine references to identical block lists by making them all point to the same blocklist instead of multiple identical blocklists. The original tool chain from id had no such optimizations and produced very large blockmaps.

The maximum size for a vanilla blockmap is approximately 65536 bytes + the amount of linedefs in the longest blocklist * 2 bytes. By combining the data from several block lists into one big list that is very long, it is possible to produce blockmaps that are well above the 65536 byte limit. This will lead to decreased performance and possibly higher chance of buggy collision detection due to bugs in other parts in the code base. Many ports have fixed these bugs, but some retain them for demo playback compatibility.

The size of a blockmap is a function of both the total area of a map (ie., the number of 128x128 blocks it covers) and the complexity of the map in terms of the number of linedefs. The more complex a map is in terms of number of lines, the smaller the amount of space is that it can occupy without exceeding vanilla format limitations, and vice versa - fewer lines in a comparatively larger amount of space. The latter case is particularly subject to improvement via compression techniques, as several block lists can be merged into a single list.

Blockmaps are composed of three parts, the header, offsets and the blocklist.

Note that there are N blocks, which is equal to columns × rows (from the header). All offsets are relative to the start of the BLOCKMAP lump. Also, the offsets are not in bytes, but in signed 2-byte shorts. The offsets are saved as 2 byte signed shorts with the least significant byte first. This means that an entry containing the value of 200 references the 400th byte in the blockmap. To compute a blocklist offset of f.ex DF 00, reorder it to 00 DF, multiply it by 2 to get the byte in the blockmap file that is being referred to, 1BE. This means that the blocklist for that block beings at byte 0x1BE in the blockmap data lump.

Blocklists for the original executable generally have two accepted formats. These are sometimes referred to as the executable format and the tool format. Id's toolchain added an extra 2-byte zero-header at the start of each blocklist. This entry is handled by the engine as linedef 0. The engine expects lists of all the lindefs and a FF FF marker to signify that there are no more lindefs in the list. Due to most tools imitating the id tool chain, most wads have blocklists with the zero-headers. As of 2016, ZokumBSP can produce blocklists without the zero-header. Any linedef on the border of two blocks will be placed in only the block on the east side of the line for vertical lines and the block on the north of the line for horizontal lines.

It is possible to use various techniques to compress the size of a blockmap compared to the implementation used by id Software. Using compression is the only way to build some large maps in a way that will not lead to runtime crashes in vanilla Doom and many source ports. A multitude of techniques are known, but most map building programs have implemented relatively unsophisticated compression algorithms. There is also a type of compression-like algorithm that allows for very large blockmaps, larger than 65536 bytes, but these blockmaps have a set of strict limitations and can in some cases trigger bugs in the Doom engine's collision code.

The project Block Rocking Bytes has implementations of some of these algorithms and techniques to act as a test bed for source ports.

This is one of the most basic and efficient ways to compress blockmaps. Up until 2016 it was the only compression scheme in use, even though other schemes had been suggested. Id's tool chain made a new list of linedefs for each block. By using the same list for several blocks where the linedef list is identical, a significant saving can be achieved. This is especially important for block lists that have no linedefs in them, these often occur in maps and outside the play area.

Although the addresses used to index blockmap lists can only address up to the 65536th byte, this refers to the start of the list. The rest of the list can be beyond the 65536 bytes. By placing the longest block list at the end, the maximum size of the blockmap can be extended up to about the size of the blockmap list. This technique was first used in a hand crafted blockmap for a test map in Block Rocking Bytes released in 2018 although the idea has been around for some time.

Most map tools produce block lists in the tools format, with a leader 00 00 header in every list. This is not handled correctly by Doom, and is instead read as linedef 0, leading to extra collision detection checks. Omitting this entry can significantly reduce the amount of bytes needed to produce a working blockmap. Doing this causes problems with a few older ports due to faulty optimizations. This bug has been fixed in most newer ports.

In some cases a list can be a sub set of another list. One block list could contain the linedefs 1,2,3,4,5 and another the linedefs 1,3,5. By rearranging the two blocklist linedef entries and having the second one point to the entry in the middle of the first list as its start entry. The two lists can be combined into one. This can be done without engine format compression, but this may trigger faulty collision code more often and twice for the first list.

Is compressed into the following combined lists:

List merges refers to the technique of merging two or more block lists that both have linedefs not in the other list(s). This is a variation of the mid list compression, but it will lead to unnecessary collision detection checks. There will always be at least 2 bytes saved when merging two lists, due to one needing only one 0xFFFF end marker. For each linedef the two lists have in common, another two bytes will be saved.

Geometry simplification is when several co-planar linedefs are replaced with one linedef. This linedef is only used for the collision detection, while the shorter linedefs are used to generate segs for rendering. This simplifies the collision geometry, making lists shorter and makes it easier to use other compression techniques. For a good example of this, look at Doom 2 map01. The central green hallway has several 64 length linedefs used to alternate textures. By replacing all those small segments with longer linedefs. Tests done on Doom 2 with ZokumBSP has shown improvements from about 8% reduction in size on map31 to 1.2% reduction on map30, with most maps being in the 3 to 6 percent range.