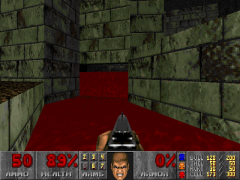 Blood river in E4M5: They Will Repent. 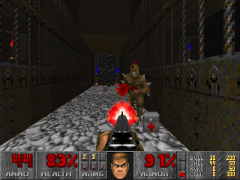 Blood is ubiquitous in the Doom games and in other games based on the Doom engine (including Heretic, Hexen, Strife, etc), and is perhaps a large factor in making them controversial in some circles (and appealing in others).

In many levels, blood flows in rivers, over blood-falls, and gathers into pools. In Doom, standing in or moving through blood is often detrimental to a player’s health (see damaging floor).

The Doom engine creates animated blood spatter when a shootable thing, including the player, is hit by a hitscan tracer (for example, a bullet). Besides enhancing the atmosphere of the game, this helps the player to know that their aim was correct. There is a special provision in the game code which scales these splatters proportionally to the amount of damage inflicted by given attack - thus, giving a rough visual clue to the player.

In both cases, vanilla Doom treats blood as a transient special effect; only the source ports (initially Doom Legacy but later ZDoom and derivatives) allow for monster blood to splatter onto walls and stick there.

For realism, hitting inanimate objects, including Doom's barrels, produces a puff of smoke rather than a blood splatter.

Furthermore, as a player's health drops in Doom, the status bar face becomes progressively bloodier, or as the manuals state, begins "to look like raw hamburger".

Some versions of Doom and related games were censored on a regional basis, either by removing elements of blood and gore or most often by recoloring the blood green.