Blood, Fire, Death is a single-level PWAD for Heretic meant for a limit removing source port. It was designed by Michailo Kolybenko (Azamael) and released on March 22, 2010. It contains two maps, although only the first one has any gameplay, set in a large temple which gives way to a massive lava-filled underground cavern, with the second map being an outro. 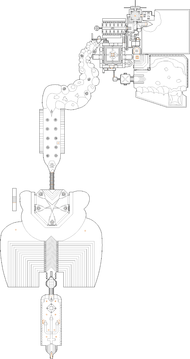 Map of Blood, Fire, Death
Letters in italics refer to marked spots on the map. Sector, thing, and linedef numbers in boldface are secrets which count toward the end-of-level tally.

* The vertex count without the effect of node building is 7272.