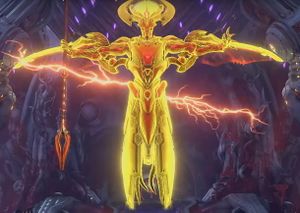 The blood Maykr charges up its energy in this capture from the teaser trailer.

The blood Maykr is an enemy introduced in The Ancient Gods, Part One, the first downloadable content expansion for Doom Eternal. It is a Maykr angel corrupted by the influence of Hell.[1] It is able to fly like a Maykr drone and can fire a stream of projectiles from its staff, as well as throwing the staff like a javelin and firing cross-shaped beams from its body.

Unlike the previously seen Maykrs, its face is exposed and it wears a helmet that resembles a set of demonic horns. It somewhat resembles a smaller version of the Khan Maykr in several respects, especially in the shape of its head and the presence of wings.

The Blood Maykr is normally protected by a gold shield, much like the Khan Maykr; while this shield is deployed its weak point—the head—is protected. The shield only lowers when the Blood Maykr is about to use its most powerful attacks, signified by it either assuming a cruciform pose or flying upwards and preparing to throw its staff - just like a Maykr drone, hitting the head with the combat shotgun's Sticky Bombs or the heavy cannon's Precision Bolt will kill it instantly and produce a shower of ammo drops. A Blood Maykr can be killed with shots to its body, but this requires much more firepower.

If the Blood Maykr is not killed during this window, it will use its power attacks after a couple of seconds. When in the cruciform pose it will fire a single cross-shaped beam straight forward followed by two more beams in an outward cone to hit players that dodge to the side; if it flies into the air it will throw its staff at the player's position three times, leaving behind an electrified area that damages and slows the player if they walk into it. When the shield is up, the Blood Maykr can fire streams of gold projectiles from its staff and slam the staff into the ground for a melee attack.

Should a Blood Maykr be possessed by a spirit, it will gain the speed bonus of other possessed monsters but can still be instantly killed with a headshot while its shield is down.

When the Icon of Sin was awakened within Urdak, many Maykr angels were corrupted by its will. The Blood Maykrs are said to have hellfire coursing through their veins, with their minds shattered by the Icon's wrath. They move freely among the demons while wrecking havoc on their former home. They retain the spears they carried as loyal servants of Urdak, which they can hurl with the force of a thunderbolt.