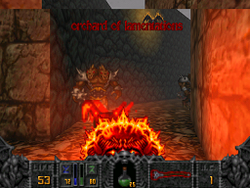 The Bloodscourge, firing at an ettin.

A stained-glass depiction of Bloodscourge.

The Bloodscourge is a weapon from Hexen, used by Daedolon the Mage. It takes the form of a long, gnarled wooden staff with a large swirling red orb set into the skull-shaped headpiece. As with the Quietus and Wraithverge, the Bloodscourge needs to be assembled from the appropriate segments—stick, stub and skull—found throughout the game before it can be used.

When assembled, it shoots three rotating bladed fireballs which home in on enemies, often tearing through them and continuing on until they hit a wall or other object. The fireballs can be repelled by the Heresiarch, centaur/slaughtaur, players using Discs of Repulsion, and the mage class while the Icon of the Defender is active. When repelled, the fireballs will return and target the one who originally fired the weapon. If that person happens to also have a shield active, the fireballs will continue to bounce back and forth until one of the shields wears off or they hit an obstacle. The Bloodscourge uses 15 blue mana and 15 green mana to fire.

Because of the Bloodscourge's combination of fast travel speed and slow homing ability, it may take some practice before the player can use the weapon to its fullest effect. Getting the enemies to form into a straight line pointing at the player often works best, and lessens the likelihood of the fireballs hitting a wall too early. It can be particularly deadly in wide open spaces, where the fireballs can circle around and strike enemies multiple times before exploding.

In the IWADs the Bloodscourge stick is first encountered on these maps per skill level:

The Bloodscourge stub is first encountered on these maps:

The Bloodscourge skull is first encountered on these maps:

The IWADs contain the following numbers of Bloodscourge sticks per skill level:

They contain the following numbers of Bloodscourge stubs:

They contain the following numbers of Bloodscourge skulls: