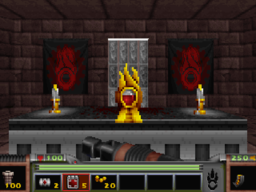 The offering chalice sits on an altar in the Sanctuary, ripe for the taking.

The offering chalice is a quest item in Strife which can be found in MAP01: Sanctuary. It is a golden goblet made in the shape of the Sigil of the One God filled with blood, presumably from a human sacrifice. It plays an important role in the first optional side quest the player may take on. In the 2014 release of Strife: Veteran Edition, a second version of the chalice can also be found which is filled with a blue liquid. It plays a different role in unlocking one of the game's new secrets. Both items are also key in the re-release's new eponymous game mode, Capture the Chalice.

The offering chalice is sought by Harris, who offers the player "more gold than he can ever spend" as well as "glory" in exchange for bringing him the item from the Order's "unofficial torture chamber" in the Sanctuary.

This quest is a ruse, however. Harris is secretly working with Governor Mourel to entrap would-be aspiring Front agents so that Mourel can increase his status within the Order. It is possible to find out before completing Harris's quest that he is a double crosser by speaking with Beldin before killing him and paying close attention - he states that he has been imprisoned for questioning due to "that bastard Harris." However, in the release version of the game, this is just vague enough that it remains up to the player to decide whether or not Harris should be trusted.

Once the chalice has been touched at all, it is too late to avoid the consequences, as picking up the item imparts a quest flag. If the player chooses to return to Harris with the item, he will find that the alarms go off inside the tavern (note that the tavern is a separate alarm area and that battles undertaken here do not affect the rest of town unless projectiles are fired out of the various windows and explode outside). Harris will swear up and down that although it looks like a setup, he still intends to reward the player. He will then give the player the Gov's Key, allowing access to the governor's mansion.

If the governor is talked to at any point after this, even if Harris is not visited again, and even if the chalice is thrown into a gulley somewhere out of sight and out of mind, the player will still be confronted by the governor as a rebel thief. In this commercial version of the game, this represents a dead end, as this will override Mourel's dialogue when the player is meant to later accept one of his two tasks in exchange for access to Norwall Prison. Tarnhill will flood with acolytes, and in particular the governor's office will be filled with them, making for a high likelihood that the player will be telefragged.

In the demo release, Harris's quest is not optional, as he replaces Rowan and is met immediately after escaping the sewage treatment plant. While the player must collect the chalice to proceed, the game plays out differently from this point. An anonymous prisoner held in the Sanctuary (in the same area used for Beldin's imprisonment in the commercial version) will alert the player that he was framed for a crime by Harris, making it clear that the man cannot be trusted.

If Harris is trusted, the outcome will be the same - access is granted to the governor, who summons a deadly flood of acolytes. However, if Harris is instead killed and his stash revealed, the player will uncover a com unit which puts the player in contact with BlackBird, one of the Movement's operators. She will instruct the player to enter the governor's mansion, but this time to retrieve a flamethrower hidden in its downstairs torture room. Doing so sets off an alarm, however, releasing a number of crusaders in town. Killing all of these crusaders opens a hidden teleporter in the store room behind the weapons shop which will take the player to the Movement Base, where he can meet Macil and complete the demo. 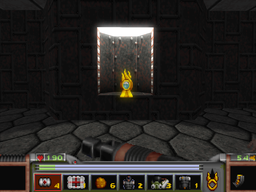 The blue offering chalice as found in Strife: Veteran Edition in the factory's manufacturing wing.

In the 2014 re-release as Strife: Veteran Edition, unless the game's "classic mode" feature is enabled, completing Harris's quest in the main campaign is no longer a dead end. While the governor will still have the player arrested (represented in-game by the player being knocked out from behind and dragged back to the sewage plant for execution), the player can once again escape his captors. Upon return to the governor, he will not mention the incident again, both due to fear of the player's prowess and because he already got what he wanted out of it. The demo campaign is unaltered.

An additional blue chalice can be found in an out-of-the-way area in the manufacturing sector of the Order's factory. If the player repeatedly talks with Timothy in the Order Commons, he will request that the player find this item for him in exchange for the promise of information. Upon delivery of the chalice to Timothy, the player receives an "info" note and is instructed to take it to a worker in the forge. The forge's Master Smithy will accept this note and in turn open the door to the super-secret new level, MAP35: Factory: Production, along with explaining to the player some elements of the game's original backstory originally explained by the Oracle, but omitted from the commercial release.

In the Veteran Edition "Capture the Chalice" game mode, the red and blue chalices function as the CTF flags for the corresponding team. They are spawned by the flag stand in each base, which share the same sprites as the red and blue talismans. To score a point, the opposing team's chalice must be stolen and brought back to the player's team's flag base while their own team's flag is within a 64-unit radius of its own flag base.