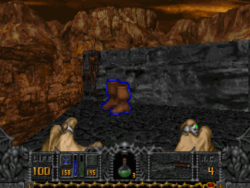 The Boots of Speed is an artifact from Hexen. When a player uses them, they will run at twice their normal speed, and also leave behind afterimages of the character that the player is using. Curiously, if the mage is moving using the Boots of Speed, the Frost Shards projectiles may damage the mage instead of firing outward.

With the vanilla Hexen engine, the afterimages could be seen by running backwards, but they cannot be seen in ZDoom unless in chasecam mode.

In the IWADs the boots of speed are first encountered on these maps per skill level:

The IWADs contain the following numbers of pairs of boots of speed per skill level: