(Redirected from Box of ammo) 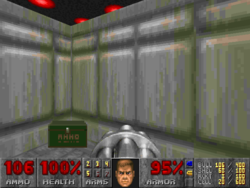 A box of bullets awaits the player following an ambush in Doom E1M3: Toxin Refinery. 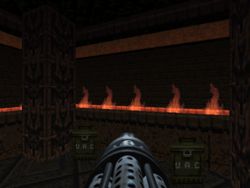 Two boxes of bullets in the starting room in Doom 64 MAP18: Spawned Fear.

A box of bullets is a box of ammo containing 50 bullets for the pistol and chaingun (100 at the I'm Too Young To Die and Nightmare! skill levels). In Doom and Doom II the box is of a military green color and says "ammo" in tan letters on the side facing the player. In Doom 64 it sports a similar color but is slightly taller and has UAC written in gray text instead. Each bullet contained within can inflict between 5 and 15 hit points of damage, determined using Doom's pseudorandom number generator.

In the IWADs the box of bullets is first encountered on these maps per skill level:

The IWADs contain the following numbers of boxes of bullets per skill level: