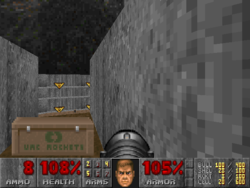 A box of rockets is a large tan box marked with the UAC logo that contains 5 rockets when picked up by the player, which serve as ammo for the rocket launcher. It provides 10 rockets, however, at the I'm Too Young To Die and Nightmare! skill levels.