(Redirected from Box of shells) 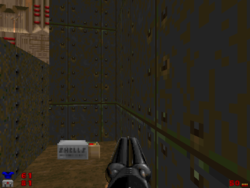 A box of shotgun shells sits behind the stairway in the first room of MAP03: The Gantlet, in Doom II. 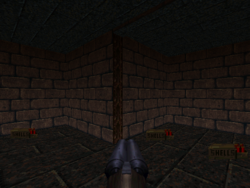 One box of shotgun shells next to two more in a secret in MAP15: Dark Entries, in Doom 64.

A box of shotgun shells is an open slide-cover shotshell box containing 20 shells for both the shotgun and the super shotgun (40 at the I'm Too Young To Die and Nightmare! skill levels). It is light gray in Doom and Doom II, and dark brown in Doom 64.

In the IWADs the box of shotgun shells is first encountered on these maps per skill level:

The IWADs contain the following numbers of boxes of shotgun shells per skill level: