Breach is a map for Doom II requiring a limit-removing source port to play. It was designed by Alun Bestor (Viggles). It originally used the music track "Waiting For Romero To Play"; the /idgames version instead uses "Breach", an original music track by Conelrad. The par time defined in MAPINFO is 10:00.

The level was originally released on 14 January, 2015, and received one of the 22nd Annual Cacowards. It was uploaded to the /idgames archive on 30 December, 2017. 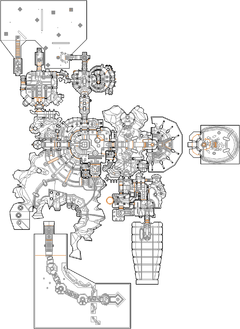 Map of Breach
Letters in italics refer to marked spots on the map. Sector, thing, and linedef numbers in boldface are secrets which count toward the end-of-level tally.

* The vertex count without the effect of node building is 21760.