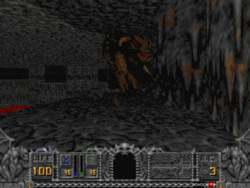 A Brown Chaos Serpent at the Hypostyle.

The brown chaos serpent is an enemy from Hexen. It looks just like its green counterpart, except that its skin is a rich brown rather than grey-green. The manual includes a single entry for both types of serpent:

The brown chaos serpent is for the most part simply a reskin of the green chaos serpent and can be fought in the same manner. They have the same stat values and behavior, however they are treated as a separate species and if the two types of chaos serpents are mixed, infighting can occur. In spite of the manual's description, the green gas balls do not have the poison effect caused by some attacks. Instead, the projectile does fire damage just like that of the green chaos serpent, and players and objects destroyed by it will use their incineration death sequence, if present.

In the IWADs the brown chaos serpent is first encountered on these maps per skill level:

The IWADs contain the following numbers of brown chaos serpents per skill level: