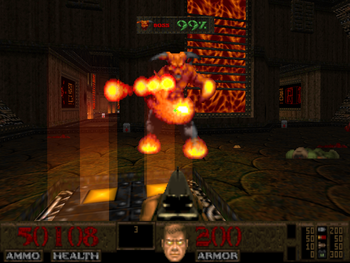 A Bruiser Demon launches fireball volley in a boss encounter.
You want to see how the "real" baron of Hell looks? You got your wish... as now this is your death wish!

The bruiser demon is a Beastiary monster named after the Bruiser Brothers (barons of Hell) that made their debut first in E1M8, the final map in the first episode of shareware episode of Doom. The bruiser demon appears as dark orange-skinned, black-legged baron, with glowing red eyes and black horns on his upper body.

His ground explosion attack is difficult to avoid in tight spaces and corridors, so if you are cornered in a trap or dead end, hope that he will not use that attack. The floor attack can hit you behind objects, regardless of the ground level, so hiding behind walls is recommended. If there are no cover places, circle strafe around the bruiser demon like crazy. Recommended weapons to use include the super shotgun when cover is available, or energy weapons (plasma gun and BFG) if you are fighting the bruiser demon in open space.

While ordinary barons of Hell often pose less immediate threat despite their endurance, the bruiser demons are both very tough and very powerful, given their special attacks. Because of the floor barrages and fireball volleys, bruiser demons should always be made high priority targets. Note that the damage from ground barrage counts as blast damage (against which bruiser demons are themselves immune). When killed, the body of bruiser demon will turn into ash.

Bruiser demons can be encountered notably in the following mods:

In ScoreDoom, the bruiser demon is one of the possible randomized replacements for the baron of Hell.

There is an purchasable power-up in Stronghold called "Morph Device." The flavor on it says that the UAC scientists have finally deciphered the genome of a bruiser demon. Indeed, when you use the Morph Device, you will actually transform into a bruiser demon with over 999% health for a limited time and will be able to use any of the bruiser demon's three attacks (alternating between then with an alt-fire button). The downside of that form is that your movement speed will be drastically slowed, about the same as a baron, and dodging attacks from enemies will be more difficult. Careful, because even with 999%+ health you can still be killed by large hordes of strong monsters that will assault your base, and the ground barrage attack (which deals the most damage) will be ineffective against enemies that are immune to blast damage, such as other bruiser demons.