Brutal Doom (also stylized as Brütal Doom) is a gameplay mod for GZDoom and Zandronum, created by Marcos Abenante (Sergeant Mark IV). Inspired by the Doom comic, the mod has many flourishes, including death animations, elaborate gore effects, and verbal taunts. It also revamps the weapons and monsters. The current version is v21, released in 2019.

Soon after its debut in 2010, Brutal Doom became very popular in the community and won the first ever Cacoward for a mod in 2011. It is among the most influential gameplay mods in Doom history, inspiring a number of other gore-themed mods, including the popular Project Brutality fork.

Brutal Doom is compatible with Doom, The Ultimate Doom, Doom II, and Final Doom. It can also be combined with its official, optional starter pack (known as Extermination Day), a set of new levels for Doom II specifically designed to work with the modification. 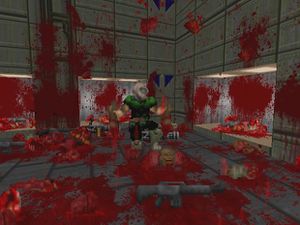 A fatality being executed on a Chaingunner.

Many weapons have been replaced, upgraded or added and have secondary fire modes that add various combat functions:

Running v20b of Brutal Doom with newer versions of GZDoom (2.3.0 and above) will give the following error:

To correct this error, open the mod file (brutalv20b.pk3) in software capable of opening .zip files, and extract the file blood.txt. Find the two instances of 0.l (with a lower case letter 'L') and replace them with 0.1 (with a number one). Replace the copy of blood.txt in the .pk3 file with the modified one, and the mod should run normally.

There is also an unofficial patch for v20b that fixes the bug as well as other bugs, it can be found here.