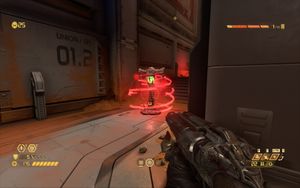 A buff totem on the Mars Core level.

Buff totems are ambient enemies placed in many combat arenas in Doom Eternal, first encountered in the Super Gore Nest. Although they do not attack directly, they are imbued with a magic similar to that of the arch-vile and they continuously summon more demons as well as bolster them with enhanced speed and damage strength; buffed demons are easily recognized from their red glow.

Buff totems are not damaged by weapons, but a melee attack on them will rip them out of the ground and destroy them. The buff totem itself is small, easily overlooked, and often placed in an obscure location; however, an alert will display onscreen whenever the player enters an area that has a buff totem present shortly before it begins to summon monsters.

Buff totems are physical manifestations of human suffering, brought into existence by demonic psychomancy. They generate a constant field of Hell magic, imbuing demons with drastically enhanced aggression while filling human minds with pure terror. The latter effect forced the ARC to invent the mind-shield, a cyber-neural implant capable of neutralizing the buff totem's psionic assault.