This article is about the mobile phone Doom port. For other uses, see CDoom (disambiguation). 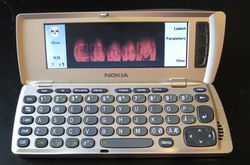 CDoom (short for Communicator Doom or Crystal Doom) is an open source mobile phone port of Doom published in 11th September 2001. It is the first Doom port for Symbian OS devices ever, and is intended to be used on Symbian OS v6.0, Series 80 v1.0, which includes the phone models Nokia 9210, 9210i and 9210c Communicators. CDoom's coding was done by Hannu Viitala and Markus Mertama who based it on Sam Lantinga's SDL Doom. Hannu had to port SDL (Simple DirectMedia Layer) first onto Symbian OS v6.0 before he could start porting CDoom.

The developers of CDoom have published only one version of it, which is 1.00. It was published in Hannu Viitala's home page on 11th September in the year 2001, and has been there since.

Although the development of CDoom in its native form may have been stopped for good, it lives on with the C2Doom project which is maintained by Markus Mertama, as it uses CDoom as its basis.

CDoom.exe is the application part which plays the WAD file. It is under C:\CDoom or D:\CDoom, depending on the storage where the user installs the application (C: is the internal storage and D: is the memory card). The folder also contains

Launcher is a native Symbian OS application file (APP). When the "Launch" button is pressed, the application closes all running applications except the phone - which is a vital part of the operating system - and starts CDoom.exe. The launcher folder lies inside D:\System\Apps or C:\System\Apps accordingly. The folder holds six files which are

CDoom in action at a super-wide 16:5 aspect ratio.

CDoom takes advantage of the whole Nokia 9210's big widescreen because its standard screen mode is 640 x 200 pixels, which is the resolution of the mobile phone's screen. Unfortunately the device's screen access or processing power forms a bottleneck which reduces the frame rate all the way down to about 3 fps. Normally it's quite high though; while walking forward the FPS count is relatively decent, only turning makes it lower, probably because the program has to draw and calculate a lot of new area to show.

This port uses almost all of the operating memory (RAM) of the target device because it needs about 3,3 MB to run. Nokia 9210 only has 4 MB free after a reboot, so the user has to close all running applications prior to playing this game.

Since CDoom readily hogs almost all of the operating memory, it doesn't have a sound or net game/ multiplayer support. Neither does it have the melting screen effect which is shown when the level is starting. These properties would elevate the need of RAM too high.

Due to Nokia 9210's relatively bad directional pad (see the image above), the gameplay isn't a good experience. The d-pad is not designed for playing games because the phone is a business device. When pressing up (move forward in the game), the d-pad doesn't hold its position but rocks from left to right easily, making the player run in circles in the game.

The Nokia 9210's keypad is similar to PC's, so all of the buttons do the same thing on the phone as they would on PC. CTRL shoots, ALT strafes etc. Because the Nokia 9210 Communicator doesn't have the function buttons F1, F2 and so on, the functions can be accessed by pressing CHR + Q (F1), CHR + W (F2) and so on.

Only a week after CDoom was published, a British software corporation WildPalm released another port of Doom onto Symbian OS v6.0, Doom 9210, which is closed source. According to Hannu Viitala, Doom 9210 uses a launcher system identical to that of CDoom.

Duplicated view in CDoom with the 320x200 pixel mode