This level occupies the map slot CONTRA. For other maps with a non-standard slot, see Category:Non-standard map slots.

CONTRA: Fort Firestorm is the seventeenth map of Reelism. It was designed by FireSeraphim and Roberto Lopez (Gothic) and uses the music track "". 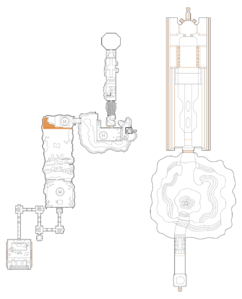 Map of Fort Firestorm
Letters in italics refer to marked spots on the map. Sector, thing, and linedef numbers in boldface are secrets which count toward the end-of-level tally.

This map is heavily inspired by the Contra series, with parts of the map directly referencing Stage 1 and 2 of Super Contra (Fort FireStorm and Fort Firestorm Interior); and Stage 2 and 3 of Contra (Base 1 and the Waterfalls). FireSeraphim was having some issues conceptualizing the alien lair portion of the map when he played an early beta of Gothic's Alien Ship map. Impressed with Gothic's work on the aforementioned level, Fireseraphim contacted Gothic about collaborating on Fort Firestorm alien lair segment and they agreed. The Alien Lair segment is based on both incarnations of the Alien Lair from Contra and Super Contra.