CROSS.WAD is a single-level deathmatch PWAD designed by Alistair Brown. It is notable for being one of the first Doom mods ever created, having been created programmatically with code written in C++; it was originally released March 11, 1994.

This level should not be confused with CROSS.WAD by Kuranes, a much larger deathmatch map from 1997, or Terry Henning's CROSS.WAD (May 1994), a fairly conventional solo map with several hundred monsters. The latter saw a bug fix release, renamed to CROSST.WAD for this reason, and Alistair Brown's level was later distributed as CROSSA.ZIP. 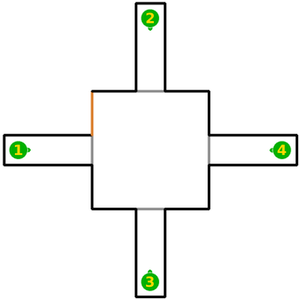 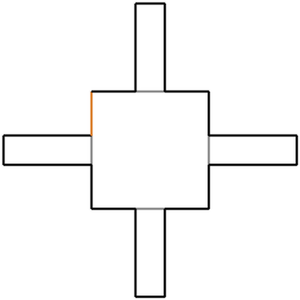 Strictly speaking, this level can be completed in solo mode, but since it includes no monsters and only one room with the exit switch clearly visible, there is not a great deal to say about it. Co-op start points are absent.

* The vertex count without the effect of node building is 20.

According to the author, the BSP calculations required to construct this map aided the development of DEU's final node builder.

When Origwad was announced on alt.games.doom, Alistair Brown replied that he also had created a PWAD by hand, which consisted of a small square room with a cyberdemon on a central square platform. This level had been used when reverse-engineering the BSP structure but was never released. CROSS.WAD was a slightly more complex level but allowed the theories derived from the simple level to be tested and proved. After CROSS.WAD was released, Alistair followed up with a lengthy technical explanation of the design process, which is included in the idgames package as MAKE-LVL.TXT.