The cacodemon in Doom 3 is a flying, lightning-belching monstrosity similar in behavior to its original counterpart, though differing greatly in appearance. This version of the monster is taupe in color, has a wider mouth, has multiple green eyes, and has several long, thin tentacles hanging from the bottom of its body. Its head has a dinosaur-like profile, and its brain is clearly visible on the top of its forehead. Cacodemons are usually found in outdoor areas, although they can be encountered in relatively close-quarter indoor areas as well, as long as the ceiling is sufficiently high. They often appear in groups of three or more and are characterized by a mysterious whirring sound they make when they are present.

The Doom 3 version of the cacodemon is considerably faster than its original counterpart, making it harder to hit and allowing it to close in quickly.

Due to increased firepower in some of Doom 3's weapons, it can be considered weaker than the classic cacodemon: it can be killed with two point-blank shotgun blasts or a second of sustained chaingun fire. However, it still requires two rockets, a third of a machine gun magazine, or more than a dozen plasma shots to kill. Like the original monster, it fires an energy ball in a straight line at the player, although this projectile is yellow instead of purple and red, and it is sometimes fired in a wild direction, deliberately missing the target, which can confuse players.

Up close the cacodemon can bite the player, although this tends to leave it vulnerable to melee attacks as the delay between opening its mouth and biting is long enough to make it rather easy to dodge. 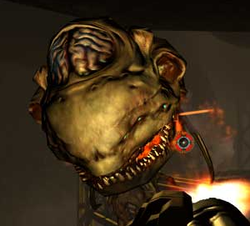 The cacodemon, despite its alterations, is not a difficult foe to deal with. It floats slowly enough and is large enough that targeting it is fairly easy, and it can be killed rather quickly with either the shotgun or the chaingun. The chaingun is often the most efficient, especially when there is plenty of open space to allow for time to keep the aim focused on the advancing beast.

Its energy balls can also be shot down and destroyed in mid-air, like every other explosive projectile in Doom 3, and they are easy to hit because they travel in a straight line.

Cacodemons are more dangerous in groups as they can surround the player and attack from occasionally unexpected angles (e.g., from above).

Its biting attack has some surprise value, but often it only leaves the cacodemon vulnerable to melee weapons such as the fist, flashlight or the chainsaw. The cacodemon is one of the Doom 3 monsters that are actually fairly easy to defeat with either the fists or the flashlight.

Steady fire on the cacodemon can destabilize and stun it for a short time.

In Resurrection of Evil, the double barrel shotgun is a highly recommended weapon, as it can easily kill a cacodemon with one blast.

At some point in development of Doom 3, the cacodemon was supposedly able to spit lost souls at the player, like the pain elemental in Doom II. It is also notable how many similarities the Doom 3 cacodemon has to the pain elemental, so it is likely that the cacodemon was originally supposed to have been a hybrid of two classic Doom monsters, like the Doom 3 Hell knight is a hybrid of the classic Doom baron of Hell and Hell knight.

The cacodemons appear commonly in middle and later levels, usually in outdoor areas or large rooms. They are less common in Resurrection of Evil.

* Some of the cacodemons in this level are spawned by the arch-viles, thus their amount can vary. Here only number of distinct spawn points is shown.